Flash mob as a new kind of advertising

Well, the fact that such advertising and advertising is not called because it would sooner look like hooliganism, often scandalous nature, but with the task copes perfectly.

Recently, in the French museum “Orsay” present among the visitors three beautiful girls model appearance first studied the paintings, then simultaneously taking off their coats were only in one beautiful lingerie and ran through the museum halls to the exit shocking everyone. It was not a numerous, but effective advertising flash mob of Etam company, which repeatedly held such “promotion” of its goods in crowded places: The French airport, near the Eiffel Tower or an ice rink. Previous flash mob actions were not so scandalous, but it seems that the French Museum will not simply forgive such a trick, as the management of “Orsay” is going to sue the company. 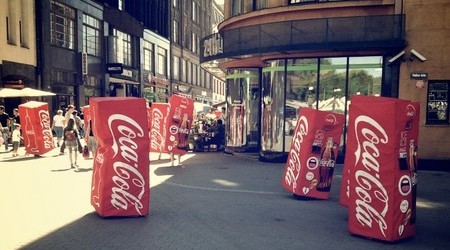 But not necessarily for the promotion of goods, brands or services to resort to scandalous and provocative methods, the presence of a famous person is sufficient. For example, the Brazilian TV channel “Sky” organized a flash mob event at the airport, inviting Giselle Bundchen. A star waiting for her flight, when suddenly “live paintings” began to approach her, which depicted the ether programs of the TV channel “Sky”.

The Coca-Cola brand used a crowd of people dressed in big costume refrigerators to run its flash mob campaign, which suddenly appeared dancing in crowded places.

Such videos have a huge success and millions of Internet views, which proves the popularity of flash mobs in advertising campaigns is only growing. This is a very profitable type of advertising because it is worth to come up with a worthwhile idea, to invite a few people with enthusiasm and without complexes – the success in your pockets is ensured.